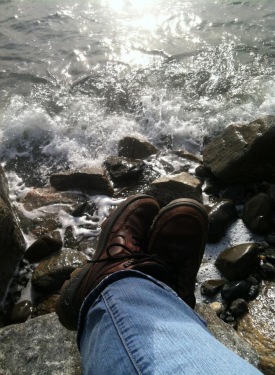 With a March snowstorm in the forecast and my annual trip to the Cape fast approaching, I had was heartbroken when my favorite boots gave out. The heel of the sole broke completely free from the rest of the boot and the kids talked me out of attempting to use super glue to fix it. I have a reputation for ending up hopelessly glued to stuff. So instead, I drove two sales ladies at the shoe store completely bonkers trying to find me a pair as close to what I had as possible. I came home with my new boots and, seeing the laces in the old ones were still good, I pulled the old laces out and set them aside. I took the old ones outside, but when it came time to put them in the garbage can, I started to cry. Yes, cry. Over a worn out pair of boots. Not a sniffle and a stray tear. Oh no. we’re talking a sit-down-on-the-steps, holding-on-to-the-boots, tears-rolling-down-the-face kind of a cry.

This is stupid. I told myself. Who in their right mind cries over a broken down pair of boots?! But the reaction was so visceral, I had to ask myself why they mattered so much to me. Honestly, I’m forty-some years old. It’s not like I’ve never thrown out a pair of boots before.

But these boots were different. These had a history. Over eleven years, I walked hundreds of miles of empty beaches with God as my companion. As beautiful as that may sound, I wasn’t always the most pleasant of company on those walks. And there were plenty of times when I resented God’s very presence in what had become the only safe space I had left. My life was in such a miserable state, all I wanted was to be left alone. It was not uncommon for me to walk four miles and spend the entire four miles yelling at God to either help me or get out of my way. Funny thing is, over time, something gradually shifted and those walks with God on the beach became less confrontational. Little by little, I stopped yelling. I stopped demanding. I stopped begging. I accepted God’s company and I found that even on those days when I thought I really, really wanted to be alone, what I actually wanted was to be alone with God because God was the only who understood what was brewing inside of me.

Over the last eleven years, I didn’t learn to trust God by sitting in church on Sunday. I didn’t learn to surrender all the stuff that was killing me inside by reading a prayer book full of prayers I was supposed to have memorized and couldn’t. There were days when I was just so hopelessly tangled up inside, the only way to untangle the mess was to take a walk down the beach and let God do the untangling. And the only way that works is to let go and let God do God’s thing and accept that maybe, just maybe, the Creator has a clue about how this particular creation ticks.

One thought on “The Prayer Boots”