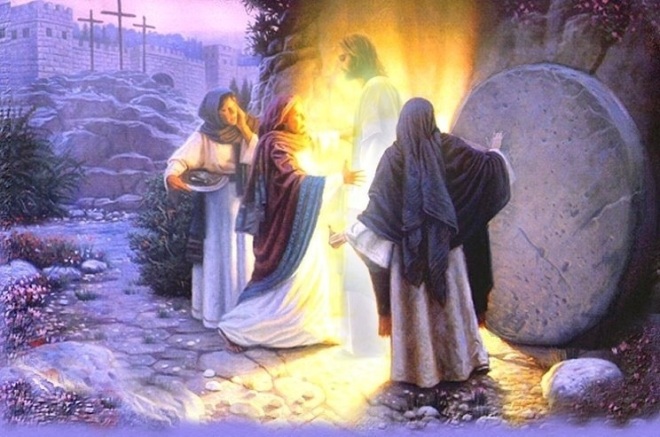 The men who followed Jesus dropped everything to follow him. For three years, they saw him perform many miracles. They heard him teach. They saw signs from the heavens. They knew he was the Messiah and yet when the soldiers showed up, they ran.

In all fairness the men had reason to run. The Pax Romana was a violent, bloody, oppressive affair. Had they hung around or interfered, chances are they’d have been killed as well.

Over the years of Jesus’ ministry, there isn’t the power play amongst the women that there was amongst the men. They aren’t vying for a favored position by Jesus’ side for the simple reason that they were women. They had no position. Ever. Women were property. They were used and discarded at the whim of men. They were invisible and voiceless. The fact they were allowed at table with Jesus to hear him teach was in and of itself an unheard breach of protocol. While there is no doubt the men loved him and believed in him, the men who followed Jesus had an agenda: to see Israel rise again. For the women, this agenda meant little. They would still be invisible, voiceless property whether under Roman rule or in a new Israel. The patriarchal society would ensure that remain unchanged.

I’m no biblical scholar, but as a woman I know what it feels like to be invisible and to be voiceless. I know what it feels like to be used and discarded at the whim of men. I also know how it feels to be seen and that is a powerful experience. When you have lost all touch with your own value and humanity, to have another see it in you and gently reflect it back to you is nothing short of miraculous. And that is what Jesus did for them. He saw them as individuals, not objects. He even saw great good even in those society had already condemned. That is not something one forgets. Ever.

While the men loved Jesus as a beloved friend and teacher, they had to come to terms with not only his capture and crucifixion but the death of their agenda, the death of their dream of a new Israel, their guilt at abandoning one whom they had loved and served. They also had to deal with their well-founded fear of repercussions.

And here lies the difference, the women loved Jesus for who he was, not for what he could be. The women saw him for what he was – he was Love Incarnate who saw them when they were invisible to anyone else and embraced them. And because they were open to his love as only the invisible and discarded can be, they in their own human way tried to do for him what he had done for them: to be there for him in love even when society had condemned him and to show him their love in whatever way they could even if all they could do was to stand at the foot of his cross and weep.

It was love alone that brought them there and kept them there. Love is the only power strong enough to have brought the women through their fear and given them the courage to stand by through the horrors of the crucifixion and the long dark hours of the day after. They trusted him to keep his word to return to them. They would not be disappointed.

3 thoughts on “Why Didn’t The Women Run?”